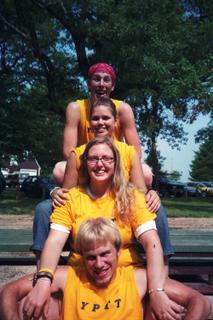 The 2005 Youth Peace Travel Team has completed its summer tour of eight camps in the east and midwest, and a visit to Annual Conference. The program was first formed in 1991 as a cooperative effort of a number of General Board programs, with a new team fielded each year. Sponsors now include On Earth Peace, the Outdoor Ministries Association, and the General Board's Brethren Witness/Washington Office, Brethren Volunteer Service, and Youth and Young Adult Ministry.

The team led peace education for youth at camps including Brethren Heights, Camp Ithiel, Camp Mack, Woodland Altars, Camp Emmaus, Camp Blue Diamond, and Shepherd's Spring, and during Annual Conference. At the camps, the four young adults led workshops, discussions, and activities such as morning watch. They also had the opportunity to get to know campers and the surrounding natural landscape. "They learned about themselves and how they work in groups," said Susanna Farahat of On Earth Peace.

Farahat worked with the team during its debriefing at the Brethren Service Center in New Windsor, Md., Aug. 12-14. "They learned a lot about community," she said. Each week, the team held a "family meeting" to discuss situations that occurred during the week. Those meetings, as well as speaking in front of larger gatherings, helped develop interpersonal communication and leadership skills. "They all got more comfortable in front of groups," Farahat said.

At Annual Conference, the team spoke at an insight session on "Teaching Peace to Youth." They also led workshops for senior high youth, supported various agencies' booths, and talked with Conference guests. The Youth Peace Travel Team spent much of its time on issues of social justice and also learning about the range of beliefs in the Church of the Brethren. "We're all Brethren, and although we all read the Bible, we're all reading it in different ways," noted Farahat. "I think that was new for them."

Young adults age 18-22 interested in being considered for next summer's Youth Peace Travel Team can obtain an application at www.brethren.org/genbd/WitnessWashOffice.html or call 800-785-3246.

source: 9/14/2005 Newsline
at 7:58 PM
Email ThisBlogThis!Share to TwitterShare to FacebookShare to Pinterest