CHRISTIAN CITIZENSHIP SEMINAR EXPLORES ‘THE STATE OF OUR HEALTH’

Seventy-two senior high youth and advisors explored questions related to "The State of Our Health" in the US and abroad at this year’s Church of the Brethren Christian Citizenship Seminar (CCS). The event began March 24 in New York and concluded five days later in Washington, D.C., with an assortment of presentations, small-group discussions, a United Nations tour, worship, and sightseeing in between.

Many speakers focused on the merits of a “single-payer” health care system, which would eliminate the insurance companies as an intermediary in the process. Instead, standard rates would be negotiated by the government in each region, similar to what is done in Canada and in many nations in Europe and elsewhere. While funded publicly, care would still be delivered privately.

Each worker would pay a small percentage from his or her paycheck to fund the system, providing resources for those who can’t afford health care on their own. Recent government estimates put the number of Americans without health insurance at about 46 million. Many companies are also being squeezed by the cost of health care coverage.

“The present system is sick and just doesn’t get the job done,” said Bill Davidson, a Church of the Brethren cardiologist from Lebanon, Pa. “Heath care is the next big social battle that’s going to take place, and you as young people have a front-row seat.” Davidson noted that the World Health Organization currently ranks the US number 37 in overall health care worldwide.

Marilyn Clement, national coordinator of Healthcare-NOW, focused on House Resolution 676, which proposes a US National Health Insurance Act, guaranteeing universal access to high-quality and cost-effective health care. Clement’s organization is leading a petition drive for the bill to be passed. “Getting there is going to be hard,” said Clement, who noted that health care costs could top 20 percent of the gross national product (GNP) by 2020 under the current system. “It’s not going to be easy.”

Palmyra (Pa.) Church of the Brethren pastor Wally Landes observed in an opening session that Brethren have often not chosen the easy road in a quest for mutuality. “Issues of health and wholeness are in our bones as Brethren,” Landes told the group. “I think God’s will is for wholeness, and sometimes stuff gets in the way.” He emphasized that health is a theological and spiritual issue, that Brethren “have always taken health and healing seriously,” and the ability of Brethren to do big things despite their relatively small size. Often, he added, some have made sacrifices to bring about justice for the larger community.

One day of the seminar focused on the more specific health issue of AIDS, which is still running rampant, especially in Africa. Church World Service (CWS) policy analyst Kathleen McNeely outlined the work being done in Africa through the CWS Africa Initiative, tackling issues of water, hunger, and poverty in addition to HIV/AIDS, while Brooklyn (N.Y.) Church of the Brethren pastor Phill Carlos Archbold related his personal story of caring for AIDS patients, using photos to show the devastation the disease brings.

Youth later in the week lobbied their representatives in Washington on the Senate and House bills they had learned about, following a session on advocacy by Greg Howe, who grew up in York (Pa.) First Church of the Brethren. Howe, now a senior policy manager on health care reform issues under Pennsylvania Gov. Ed Rendell, described his call to advocacy work and offered pointers. He said that while many states are working at the issue, “we need a federal solution.”

--Walt Wiltschek is editor of the Church of the Brethren “Messenger” magazine.
at 7:09 AM 0 comments
Email ThisBlogThis!Share to TwitterShare to FacebookShare to Pinterest
Labels: CCS

The Youth Heritage Teams are coming! 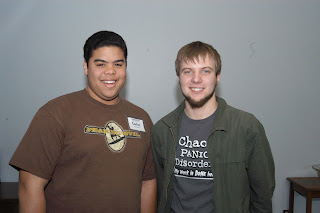 In 1708, Alexander Mack and seven others risked their security and safety by going to the Eder River to be re-baptized as adults and begin a new church. The Church of the Brethren was born. Next year we will celebrate the 300th anniversary of those historic steps.

An exciting piece of that anniversary celebration is the commissioning of Youth Heritage Teams. Each district was invited to call out two youth for this responsibility. Our district called James Gibble-Keenan of the Highland Avenue congregation in Elgin and Carlos Maldonado of the Cerro Gordo congregagtion.

Their call began with a trip to the General Offices in Elgin, Ill., where they attended an intensive training event April 13-15. Their time there included learning more about our heritage as Brethren, leadership skills, and how to effectively communicate with congregations in worship and workshop settings.

Now they are ready to share at events in the district over the next year, up until June 2008. They will be sharing at the district camps and district conference, as well as some congregational visits. For information on scheduling the team in your area, contact the district office at 630-261-0951.

Why have a Youth Heritage Team at your congregation? It helps to provide an important leadership development opportunity for the youth who are serving on the team and making these visits. It helps to revitalize our congregations as we learn and connect together. And it helps all of us deepen our Christian discipleship as we learn more about our Brethren heritage and values. Be part of the celebration!
at 7:33 AM 0 comments
Email ThisBlogThis!Share to TwitterShare to FacebookShare to Pinterest
Labels: HeritageTeam

The Youth and Young Adult Ministries of the Church of the Brethren General Board has named a new National Youth Cabinet for the denomination, to help plan youth events for the year 2007-08.

The six youth who have been named to the cabinet are Seth Keller of Dover, Pa.; Heather Popielarz of Prescott, Mich.; Joel Rhodes of Huntingdon, Pa.; Turner Ritchie of Richmond, Ind.; Elizabeth Willis of Tryon, N.C.; and Tricia Ziegler of Sebring, Fla.