Brethren workcamps schedule for 2015 is released

The Church of the Brethren Workcamp Office has released the workcamp schedule for 2015, which is now available at www.brethren.org/workcamps. The theme for the year, “Side by Side: Imitating Christ’s Humility” is inspired by Philippians 2:1-8. A brochure will be mailed soon to congregations. For questions, contact the Workcamp Office at cobworkcamps@brethren.org.

Find the full workcamp schedule with links to descriptions of each workcamp and a picture key identifying the different types of work at each site, at www.brethren.org/workcamps/schedule. The key provides a rough guide to the five different types of work: emphasis on relational service, gardening and eco-service, construction and painting etc., food bank or soup kitchen, thrift store or packaging clothes.

The Powerhouse regional youth conference has reached its fifth anniversary! Powerhouse will return to Camp Mack near Milford, Ind., on Nov. 15-16, providing a weekend of worship, workshops, music, recreation, and more for senior high youth in the Midwest and their advisors.

Join in this action-packed and faith-filled weekend following on National Youth Conference. The theme this year is “Almost Christian: Seeking an Authentic Faith,” drawing on the book “Almost Christian” by Kenda Creasy Dean and other studies that have been done in this area.

Jonathan Shively, executive director of Congregational Life Ministries for the Church of the Brethren, is the keynote speaker for three worship times during the weekend. Seth Hendricks, pastor of Happy Corner Church of the Brethren in Dayton, Ohio, and a member of the band Mutual Kumquat, returns as music leader. Opportunities also will be available to visit and tour the Manchester University campus in North Manchester, Ind., about 45-50 minutes from Camp Mack, before or after the conference, and perhaps as a workshop option on Saturday.

Groups coming from a distance and needing a place to stay in the area on Friday night may contact us and we can help make arrangements to stay at Manchester University or with congregations in the area.

Cost is $75 for youth, $65 for advisors (for extenuating circumstances, please contact us). Everyone will have a bed to sleep in. Participants should bring their own bedding and towels. The camp will be preparing the meals. All the forms needed to register and a host of other information is at www.manchester.edu/powerhouse. Please be in prayer for this event and encourage your youth and advisors to attend.

— Walt Wiltschek is director of Religious Life and Church Relations at Manchester University. For more about Manchester go to www.manchester.edu.

Reprint from Church of the Brethren Newsline September 3, 2014
at 11:00 AM 0 comments
Email ThisBlogThis!Share to TwitterShare to FacebookShare to Pinterest
Labels: Manchester University, RYC

The youth of IL/WI District will be working at the Northern Illinois Food Bank during District Conference weekend. They’ve asked the district people to make a donation of foods. Below is a list of most-needed food items (no glass jars please):

Please bring the food items with you when you register Friday night for district conference. 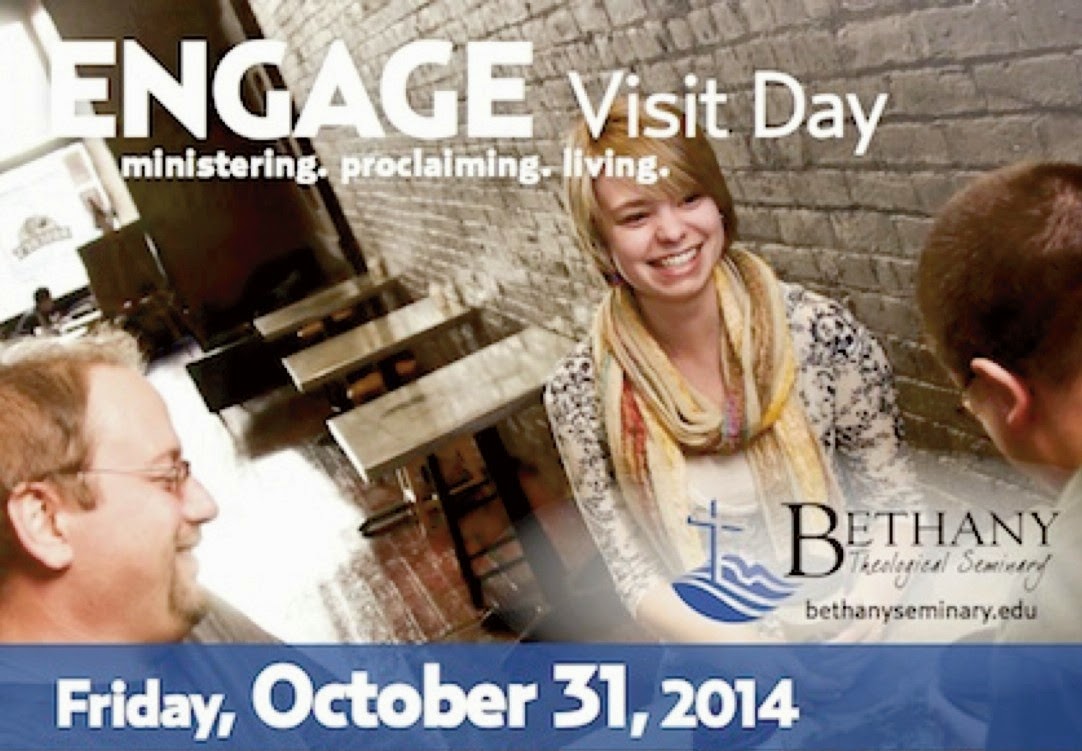 Richmond, IN - Bethany Theological Seminary will welcome prospective students to the fall Engage Visit Day on Friday, October 31, 2014. Now in its seventh year, this event is designed to both provide students with practical information about enrolling in seminary study and to include them in seminary activities and experiences.

Campus guests will take part in worship, interact with a panel of current students, attend class, meet with faculty, and be informed about the admissions process, all with encouragement for each participant to continue discerning the path to which they are called.

Registration is now open at www.bethanyseminary.edu/visit/engage, which also lists the day's schedule. For more information, contact Tracy Primozich, director of admissions, at primotr@bethanyseminary.edu.
at 10:00 AM 0 comments
Email ThisBlogThis!Share to TwitterShare to FacebookShare to Pinterest
Labels: Bethany Seminary

‘Honor God by Honoring Others’ is theme for Junior High Sunday

Churches of the Brethren are encouraged to celebrate Junior High Sunday on Nov. 2. The theme for the 2014 observance of Junior High Sunday is “Honor God by Honoring Others,” based on Matthew 7:12, “In everything do to others as you would have them do to you; for this is the law and the prophets.”

Worship resources include calls to worship and benedictions, invitations to give and blessings for the offering, a litany of confession, a scripture jam, a children’s story, and other creative worship elements.

“Do not neglect to show hospitality to strangers, for by doing that some have entertained angels without knowing it” (Hebrews 13:2). This theme scripture will help guide the Christian Citizenship Seminar for 2015 in a study of US immigration.

This seminar for senior high youth and their adult advisors is scheduled for April 18-23, 2015, and will be held in New York City and Washington, D.C. It is sponsored by the Church of the Brethren Youth and Young Adult Ministry.

“Please join us as we delve into topics that will challenge and support growth in our knowledge, compassion, understanding, and faith in learning about such an important and timely issue,” said an announcement.

The brochure for the event notes that “US immigration policy is a complex and polarizing issue, regardless of whether it is discussed in the halls of Congress or the Fellowship Hall.... Participants at the 2015 Christian Citizenship Seminar will strive to understand current government policy, various suggested reforms, and the consequences of both on immigrant communities. We will learn how our faith in Jesus, expressed in our theology and action, can inform and compassionately shape our response to immigration.”

Registration for the seminar opens Dec. 1. Space is limited to 100 people so early registration is advised. Cost is $400. For more information and a downloadable brochure, go to www.brethren.org/ccs.

The Church of the Brethren seek candidates for the full-time salaried position of coordinator of orientation for Brethren Volunteer Service (BVS). Major responsibilities include organizing orientation, securing facilities and resource leaders, providing leadership, reviewing volunteer applications, counseling volunteers, facilitating community building, and evaluating orientation upon conclusion. The coordinator also oversees social media connections for BVS including Facebook, Twitter, and the BVS webpage. Additional responsibilities include co-supervision of BVS staff volunteers and providing administrative back up in the absence of the BVS director. This position requires significant travel that can take up to a month at a time. Required skills and knowledge include knowledge of Church of the Brethren heritage, theology, and polity; ability to articulate and operate out of the vision of the Mission and Ministry Board; and demonstrated ability to perform administrative and management tasks. Candidate must enjoy working in a team environment and must be flexible with evolving program needs. Training or experience in group building and dynamics, training of groups and individuals, and recruiting and assessment of individuals is required for this position. A bachelor’s degree is required. Application of relevant philosophies learned through course work and seminars is helpful. This position is based at the Church of the Brethren General Offices in Elgin, Ill. Applications will be received beginning immediately and will be reviewed on an ongoing basis until the position is filled. Request the application form by contacting the Office of Human Resources, Church of the Brethren, 1451 Dundee Ave., Elgin, IL 60120; 800-323-8039 ext. 367; humanresources@brethren.org. The Church of the Brethren is an Equal Opportunity Employer.

The theme is "Honor God by honoring others" based on Matthew 7:12.

The theme for the upcoming Christian Citizenship Seminar is U.S. Immigration. Please join us as we delve into topics that will challenge and support growth in our knowledge, compassion, understanding, and faith in learning about such an important and timely issue.

at 5:30 PM 0 comments
Email ThisBlogThis!Share to TwitterShare to FacebookShare to Pinterest
Labels: CCS 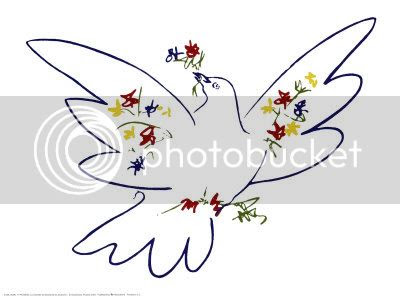 
Aspiring student writers are encouraged to begin considering their entries for Bethany Seminary’s 2015 Peace Essay Contest: Peacemaking, Creation Justice, and the Beloved Community. Building on its success in 2014, the contest again is being held as part of the peace studies program at the seminary.

The peace essay contest is open to seminary, graduate school, college, and high school students who are fully enrolled in a program en route to a degree. Prizes of $2,000, $1,000, and $500 will be awarded for the top three essays. Topics to address may include but are not limited to the following:
Scott Holland, Slabaugh Professor of Theology and Culture at Bethany, sees the 2015 theme as a timely one, noting how the recent People’s Climate March in New York City drew participants from across political, religious, and cultural boundaries toward a common cause. “I have spoken with career farmers, experimental urban gardeners, and students of religion and science who--in the spirit of the New York march--are convinced that creation care is becoming a unifying peace and justice issue. All express the conviction that it will be difficult to achieve peace among the nations unless we together make peace with the gift of God's creation through responsible stewardship of the land.”

A natural fit within the teaching and learning in peace studies at Bethany, the essay contest is underwritten by the Jennie Calhoun Baker Endowment, funded by John C. Baker in honor of his mother. Described as a “Church of the Brethren woman ahead of her time,” she was known for actively pursuing peacemaking by meeting the needs of others, providing community leadership, and upholding the value of creative and independent thinking in education. John Baker saw her vision and modeling of contemporary peacemaking reflected in Bethany’s collaborative leadership among the three Historic Peace Churches and thus selected the seminary to administer the endowment’s programs.

John Baker, a philanthropist for peace with a distinguished career in higher education, and his wife had also helped establish the peace studies program at Bethany with an earlier endowment gift. “John and Elizabeth Baker were deeply committed to building cultures of peace,” says Holland. “This peace essay contest is intended to encourage thoughtful writing on peace in essays that are informed by the rich traditions of God's shalom and Christ's peace yet articulated in voices that are public, ecumenical, and interfaith. There is also the hope that this contest will lead to international networking and partnerships in pursuit of peace.”

Holland administers the Baker endowment programs and is assisted in the essay contest by Bekah Houff, coordinator of outreach programs, who chairs the planning committee. Other members of this year’s committee are Kirsten Beachy, assistant professor of visual and communication arts at Eastern Mennonite University (Mennonite); Ben Brazil, assistant professor and director of the Ministry of Writing Program at Earlham School of Religion (Friends); Randy Miller, editor of the Church of the Brethren “Messenger” magazine; Abbey Pratt-Harrington, alumna of Earlham School of Religion (Friends); and Joanna Shenk, one of the pastors at First Mennonite Church in San Francisco. Brazil, Holland, Miller, and Shenk also will serve as judges.

Essays can be submitted between Jan. 1-26, 2015, and results will be announced by the end of Feb. 2015. Winning essays will appear in selected publications of the Church of the Brethren, Friends, and Mennonite faith communities. For guidelines, terms, and submission procedures, go to www.bethanyseminary.edu/peace-essay . Contact Bekah Houff at houffre@bethanyseminary.edu or 765-983-1809 for additional information.

-- Jenny Williams is director of communications and alumni/ae relations for Bethany Theological Seminary.