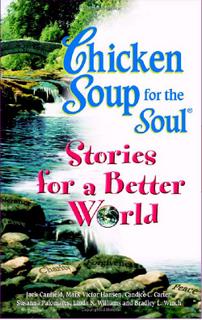 Sailing to NYC on a sea of chicken soup.

Williams has spent more than five-and-a-half years "birthing" the new Chicken Soup for the Soul book--"Stories for a Better World"--which includes more than 101 stories of peacemaking. She now wants to get it into the hands of everyone on the planet, she says, especially Brethren youth. The new book is highlighted in the September issue of the Church of the Brethren "Messenger" magazine. Twenty percent of the stories and four of the 11 cartoons came from people with Historic Peace Church connections.

Williams felt compelled to bring stories of peacemaking into the national consciousness via the Chicken Soup for the Soul venue in response to the murder of an elderly relative, and then the Columbine High School shootings. She has already received evidence that peacemaking can be very effectively promoted by touching the hearts of readers. In one example, a friend had been outspoken about the need for retaliation and revenge after the events of 9/11. When Williams needed volunteer readers to help rate stories for the new book, she felt God urging her to ask this friend if she would be interested. After her friend read and rated several batches of the powerful stories, Williams expressed her appreciation. Her friend replied, "No, I need to thank you; by reading these stories, I've seen there are so many ways to deal with violence!"

Williams now has arranged to offer the book at a substantial discount of more than 50 percent off the $12.95 selling price so that churches and youth groups can use it as a fundraiser for National Youth Conference in 2006. Churches and other nonprofit groups may also do other fundraising using the book. An additional option exists of becoming an "Amazon Associate" with a no-effort way to earn four to 10 percent of the book's sales price by simply putting it on an organization's website and encouraging buyers to order the book from the site.

For more information about fundraising opportunities contact Williams at LKW_BetterWorld@yahoo.com or 619-583-8454.

Source: 9/28/2005 Newsline
at 5:44 PM
Email ThisBlogThis!Share to TwitterShare to FacebookShare to Pinterest