Registration opens Jan. 5 at 8 p.m. central time for the Church of the Brethren's 2009 workcamps. The 2009 workcamp theme is "Bound Together, Finely Woven." Workcamp opportunities are available for junior high youth, senior high youth, and young adults, as well as a new opportunity for an intergenerational workcamp on the theme, "Passing on the Peace Witness," available for families. Also new this year is "We Are Able," a workcamp for intellectually disabled participants to work alongside a service partner. Go to www.brethrenworkcamps.org for a bulletin insert with a list of the 2009 workcamps and more information, or call the workcamp office at 800-323-8039.

For the 2009 Annual Conference, the Church of the Brethren's Congregational Life Team is sponsoring a contest for the best 3-minute video giving a creative interpretation of the Conference theme, "The old has gone! The new has come! All this is from God!" The winner of the contest will see their video shown from the floor of Annual Conference and will receive a $100 prize. Up to four runner-ups will have their videos distributed on a DVD at the Conference and will receive $50. The video contest entry form and an information form are at www.emergentbrethren.org. For more information contact Jeff Glass at jglass_gb@brethren.org or 888-826-4951.

Coordinators have been chosen for the Church of the Brethren's National Youth Conference (NYC) in 2010. The conference takes place every four years, sponsored by the denomination's Youth and Young Adult Ministry.

The NYC coordinators will serve as fulltime volunteers through Brethren Volunteer Service. They will spend 15 months working in the Youth and Young Adult Ministry Office in Elgin, Ill., beginning in May 2009. The work will entail planning for the gathering of thousands of Brethren youth at Colorado State University in Fort Collins, Colo., on July 17-22.

Dates have been announced for the Church of the Brethren's National Youth Conference (NYC) in 2010: July 17-22. The conference is sponsored by the Youth and Young Adult Ministry Office. It will take place at Colorado State University in Fort Collins, Colo., beginning with dinner on Saturday, July 17, and concluding Thursday morning, July 22, at 11:30 a.m.

Source: 12/3/2008 Newsline
at 11:47 AM 0 comments
Email ThisBlogThis!Share to TwitterShare to FacebookShare to Pinterest
Labels: NYC
2009 Christian Citizenship Seminar on April 25-30

The 2009 Christian Citizenship Seminar on April 25-30 will focus on the topic of modern-day slavery. The event for 100 high school age youth and advisors is sponsored by the Brethren Witness/Washington Office and the Youth and Young Adult Office of the Church of the Brethren. All high school youth and adult advisors are eligible to attend. Churches sending more than four youth are required to send at least one adult. Registration is limited to the first 100 youth and advisors who apply. The seminar will begin in New York City and end in Washington, D.C. The registration fee of $350 includes lodging for five nights, dinner on the opening evening, and transportation from New York to Washington. At www.brethren.org go to keyword "Youth/Young Adults" and click on "Christian Citizenship Seminar" for more information and to register. Registration ends Feb. 28, 2009, or as soon as 100 registrations are received.

Source: 12/3/2008 Newsline
at 10:49 AM 0 comments
Email ThisBlogThis!Share to TwitterShare to FacebookShare to Pinterest
Labels: CCS

This fall's district senior high youth retreat, held during district conference in Peoria, focused on "The Pursuit of Peace." Marie Rhoades from On Earth Peace served as our resource leader for four sessions during the weekend.

Marie had the youth explore several passages of scripture, with a focus on thinking about who was the powerful and the powerless, the insiders and outsiders, in each story. We also considered what things lead to violence and what leads to peace. 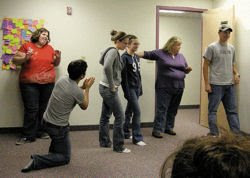 The group of 20, representing seven congregations, was well hosted by a Covenant congregation near the Peoria Church of the Brethren. Youth joined the opening and closing worship services at the conference and also came over for the Andy and Terry Murray concert Saturday evening, serving up ice cream for the social time afterwards. Andy and Terry were kind enough to spend some time in a Q&A session with the group.

The rest of the weekend was spent eating, playing games, spending time in devotions and worship, and recreation at the River Center. (Thanks to Dana McNeil and the Peoria church for setting up our accommodations and the recreation/shower time!) 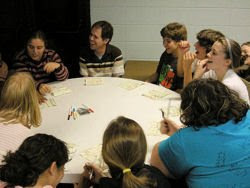 The spring retreat is tentatively scheduled for April 17-19 in the northwest part of the district. Watch for further details. Youth are also encouraged to consider participation in one of the Church of the Brethren summer workcamps (registration begins Jan. 5 at www.brethren.org) and the national youth Christian Citizenship Seminar on modern-day slavery, which will be April 25-30 in New York and Washington, D.C. (see www.brethren.org/genbd/yya/CCS.htm).