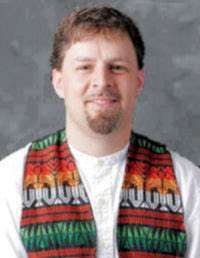 Shawn has been in McPherson, KS, for six years. Originally from Bridgewater, Virginia, he received a Bachelor of Science in political science with minors in economics and peace studies from Bridgewater College in 1992. He earned his Master of Divinity degree from Bethany Theological Seminary, Richmond, Indiana, in 1998, graduating with distinction in biblical studies and with an emphasis in peace studies.

From 1992 to 1994, Shawn served in Brethren Volunteer Service as the Church of the Brethren coordinator for youth workcamps (92-93) and the 1994 National Youth Conference.

Shawn was the Sunday morning preacher at the 1995 Church of the Brethren Annual Conference in Charlotte, NC; the main presenter and speaker at several regional and national church events, and was the commencement speaker in 2006 at McPherson College.

Shawn is married to Alison Flory Replogle, who works part-time as an elementary school counselor in Lindsborg, KS. They have two sons, Adin, age seven, and Caleb, age five, and a daughter, Tessa, age two.
at 3:58 PM
Email ThisBlogThis!Share to TwitterShare to FacebookShare to Pinterest
Labels: NYC